2-7 (Deuce to Seven) Triple Draw Lowball is a poker game in which the low poker hand wins the pot at showdown. In other words, it is a form of ‘Lowball’. It is a ‘draw’ game, meaning that you are dealt five cards, and may discard from zero to five of them on the draw, and receive that number of replacement cards. In Triple Draw, each player (maximum 7 per table) has the opportunity to draw three times, though you may ‘stand pat’ (not discard any cards) on any or all of the draws.

How to Play 2-7 Triple Draw

First, it’s important to understand that the hand rankings are different in 2-7 than in other low games. In 2-7, straights and flushes count against your low hand, and aces are always high. So the best possible hand is: 7, 5, 4, 3, 2. The following 2-7 hands (not a complete list) are ranked from least powerful (#1, which will rarely win the pot) to most powerful (#16, the nuts):

Draw games are played using forced bets known as blinds, with the player sitting to the left of the dealer button posting a small blind, and the player to their left posting the big blind. The small blind is usually equal to half the size of the big blind. Lowball is also sometimes played with an ante, which is a small forced bet posted by each player in addition to the blinds.

Each player is dealt five cards face down. There is then a round of betting, where you have the option to either call, raise, or fold. Players still left in the hand after the first round of betting now have the opportunity to draw. That is, each player selects which (if any) cards he wishes to discard by clicking on them. By clicking a second time on a card that you have planned to discard, you remove it from the discard set. You can discard all five cards if you wish. If you feel that you already have a strong hand, you can opt to ‘Stand Pat’. This means that you are choosing not to discard any of your cards. Discarding continues around the table clockwise. When it is your turn to discard, you press the button to confirm you wish to discard the selected cards.

After the first draw, there is another round of betting, beginning with the first active player to the left of the button.

There are two more draws with a round of betting following each one, resulting in three draws total, and four rounds of betting. If more than one player is still left in the hand at this point, a showdown takes place, with the player holding the best hand taking the pot.

So the sequence of action is:

The player with the best five-card 2-7 hand wins the pot. After the pot is awarded to the best hand, a new game of 2-7 Triple Draw is ready to be played.

If two or more hands have the same value, the pot is equally split among them. There is no rank of suit for the purposes of awarding the pot. Please remember, this is different from other forms of low or high/low poker, where an ace can be played either high or low. In 2-7, an ace is always the highest card.

Learn How to Play 2-7 Triple Draw for Free

If you are unfamiliar with 2-7 Triple Draw poker, we recommend you try the game out first to get a feel for how it’s played. You are always welcome to play on free poker tables at PokerStars, and sharpen your skills before playing real money poker.

As well as 2-7 Triple Draw, we also offer many other poker variants. See our Poker Games page to learn more.

If you have any questions about 2-7 Triple Draw Lowball games at PokerStars, please email Support.

Find out how the different hands compare in Texas Hold'em, Omaha and other games.

The poker dictionary is your reference for poker jargon and the language of poker.

Make your first real money deposit and start playing at PokerStars. Deposits are fast and secure.

Rules of the Game

Deuce to Seven Triple Draw is a lowball game where the best hand is 23457. Straights and flushes count against you and the aces are considered high. It is extremely popular in mixed cash games as there is always a lot of action that helps liven up the entire mix.

Deuce to Seven is a one winner limit game so a tight aggressive style is widely considered ideal. This means that one should always enter the pot with a raise and frequently re-raise someone that entered before you if that will significantly increase the odds of getting the pot heads-up.
Much of the play after the first draw is fairly straightforward. If you are drawing fewer cards than your opponent you have an automatic bet. It is particularly important to bet after the second draw if you have a one card draw and your opponent is drawing two. You must take a shot at winning the pot without a showdown.

When you are both drawing the same amount you should tend to bet only when you improve. When you are drawing more cards you should be check/folding or check/calling most often but when the situation is right you must not be afraid to put in a check/raise if you improve dramatically.

For example, after the second draw if you improved to an 23678 after drawing two you have an easy check-raise against an opponent that drew one. It is not because your holding is a monster in this game; it is because the vast majority of players will bet regardless of whether or not they improved. And they should be betting because when you don’t improve at all you must fold, so to balance it out you must punish them when you hit. It is also within the realm of possibility that your opponent may break a better hand which is obviously an outstanding result.

A reasonable set of opening requirements at most tables would be as follows: 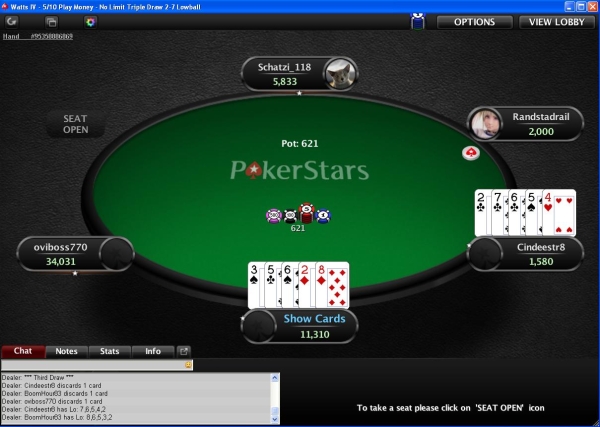 Super System 2 by Doyle Brunson (Rating 9/10) – The chapter on this game was authored by Daniel Negreanu and serves as an excellent introduction to the game. It covers the vast majority of the basic strategy and heeding the advice within will certainly make you a tough opponent as you learn the nuances of the game.

A Poker Player’s Guide to Mixed Games by Ken Lo (Rating 7/10) – This book is worthwhile for any mixed games player and there is a sizeable chapter on Deuce within the book. It also serves as a good introduction to the game but it reads too much like a textbook and is also very repetitive.